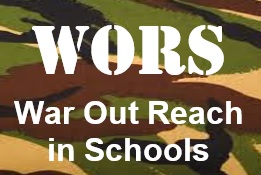 WORS Is an educational project that raises awareness of the Impacts of ‘War, Conflict and Remembrance for Children, Young People, General Public and memory retention of Older People.

GCN is able to attend School Assemblies and provide short presentations to both Schools and Youth Groups in order to help bring the teaching of WW1 and WW2 to life. GCN has a number of uniforms and decommissioned weopons that can help fire a young person's imagination!

1) Support Teaching of curriculums, preparation of GCSEs and Youth Groups Community subjects that include WW1, WW2 and the Cold War. We aim to provide low cost or free (where possible) Work Shops and Assemblies with 'Hands On' experience of the following resources:

2) The GCN 'WORS' Project can support Schools, Youth Groups and the General Public during the run up to the ‘National Act of Remembrance in the UK’ (Sep-Nov) with:

This talk can be used to help reduce the stigma of mental ill health with pupils. This talk can make links from WW1 'Shell Shock’ to the present PTSD with Veterans, to the Emergency Services, Parents, Teachers and then the Young People themselves may need Mental Health Support.

4) GLOS100 – celebrating the Post WW1 Beginning of the Royal British Legion and the Poppy Appeal of:

5) ‘Gloster Hill’ - Battle of Imjin Mobile Display to mark the Anniversary of the Battle of Imjin River, South Korea, of the Infantry Gloucestershire Regiment, 22nd-25th April 1951, Cold War will include: