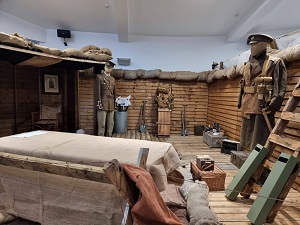 Why did GCN carry out this event?

Our WORS volunteers were dressed in uniforms ranging from French to British Pilots and Infantry with a 25 foot Mobile Trench and Regimental Aid Post. Volunteers explained the injuries that were caused by weapons and munitions, ranging from bullets to shell fragments and poison gas.

The initial three phases of the Casualty Evacuation Route was explained, starting with stretchers taking injured casualties from No Man's Land into a Regimental Aid Post and Dressing Station as seen within Display 1.

Additional workshop exercises included cutting back on head injuries by using trench periscopes, camouflage and a progression of hats from cloth to steel helmets.

One of our volunteers, dressed as a WW1 Volunteer Nurse, helped explain the Whole Casulty Evacuation Route using a Trench model showing the No Man's Land, Regimental Aid Post and Dressing Station where you would see a medic (possibly a doctor).

Nurses would first be seen at the Casualty Clearing Station. The final stage in the Casualty Evacuation would be casualties reaching Base Hospitals both in France and in England.

Also in the second Display area the Volunteer Linda ( Dressed as a Nurse) explained the impact that WW1 had on women's lives ranging from being Nurses, Munitions workers and setting up their own women's football teams.

Aims of the Event

To provide the pupils (Studing History) a physical examples of the Casualty Evacuation Routes.

To promote and inspire desire to learn more about medICin through time with a focus on WW1.

Students were asked to rate the 'Taste the Trench' experience out of 10 (10 being "amazing" and 1 being "didn't find it that interesting". Below are the percentages for each rating given by those students who completed this question (90 students): 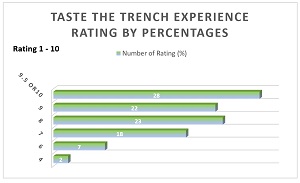 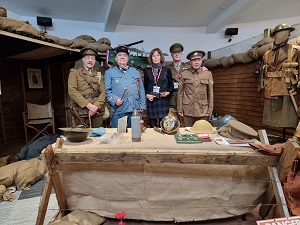 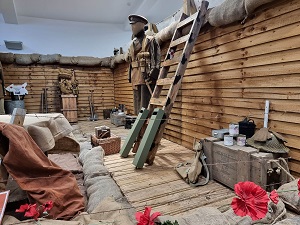 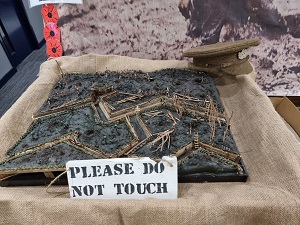 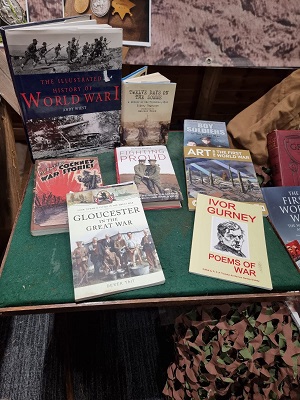 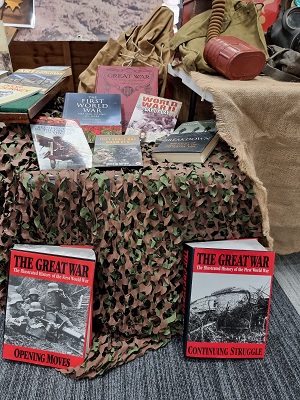 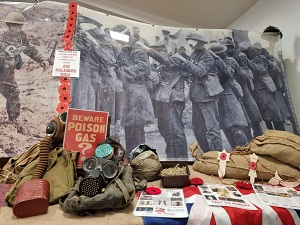 Examples of Gas Masks and examples of multi-faith poppie markers 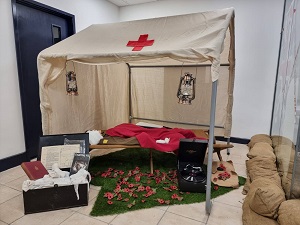 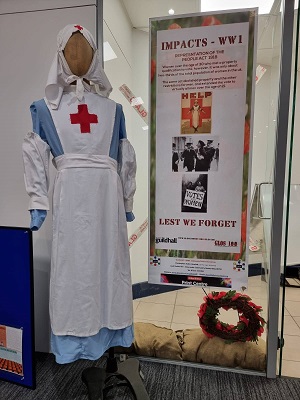 Impacts of WW1: Women at War 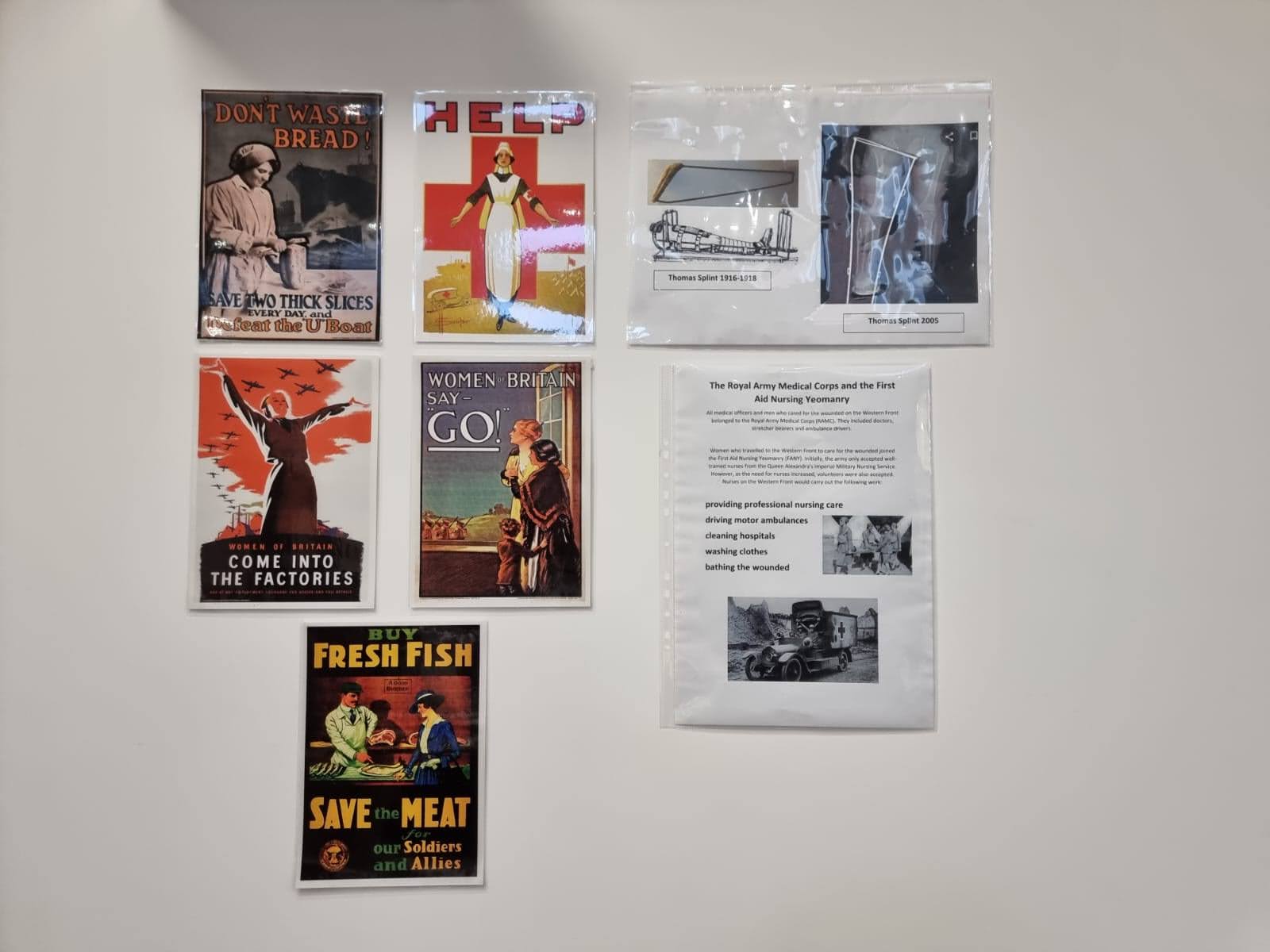 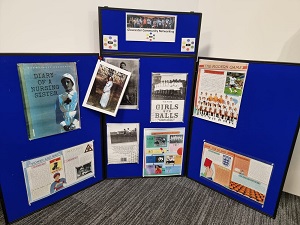 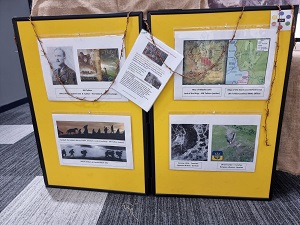 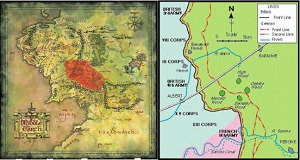 'Real life to story' map: Picture on Right: the Battle of the Somme. Picture on Left: map of Middle Earth (Lord of the Rings) showing similarities to Picture on the Right

Right Silhouette: WW1 British Army Soldiers at the First Battle of Passchendaele in 1917. Left Silhouette: the film Lord of the Rings » 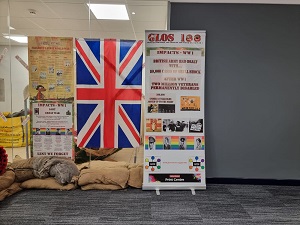 Impacts of WW1: displays ranging from Shell Shock to LGBT 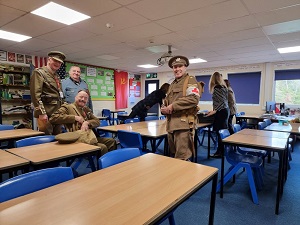 "The 'Taste the Trench' display was a fantastic way to consolidate and strengthen our students' understanding of World War One. Chris and his team of volunteers engaged and enthused our students with a wide variety of exhibits, stories and artefacts. Highly recommentded by staff and students alike!"

"What a great way to bring history lessons and textbooks to life! Staff and students found the exhibition to be totally immersive and to be able to see and touch the artefacts on display added an extra dimension to the students' experience. Chris and the volunteers have a wealth of knowledge and this was explicitly linked to what is being taught in the KS3 National Curriculum and for exam specifications of GCSE History. Students left with plenty of pictures and additional knowledge of World War One."

"The 'Taste the Trench' display and talks were very useful in allowing the students from both KS3 and KS4 to visualise the circumstances in a trench environment and understand the hardship that the soldiers had to ensure in these difficult conditions. Chris and his fellow enthusiasts provided an informative and expansive talk on a variety of key topics, from equipment and living conditions to the medical evacuation system and the role of the women during WW1. A highly recommended addition to the curriculum."

"I found the 'Taste the Trench' to be hugely engaging for our students. A highlight was seeing students chatting and asking questions about the weapons. I also loved watching one of our students dressing up and really FEELING the weight of seapons and uniform the soldiers endured. Several of my students volunteered snippes of information they've rememberd or picked up during the talk in subsequent lessons. Thanks!"